Is the Pink Tax biting into your budget?

Is the Pink Tax biting into your budget?

Who knew that simple pink packaging could have such a negative impact on a shopper’s bottom line? Watch as Cathy pulls back the curtain on the pink tax and shows how you can save big bucks by showing a blind eye to packaging ploys. The pink tax is when women are paying more than men for the same item.

KDWF Fox 4’s Jenny Anchondo interviews Cathy DeWitt Dunn on The Pink Tax and how it may be affecting your bottom line.

Jenny Anchondo: All right. Have you ever heard of something called The Pink Tax? Basically, it refers to the practice of women and girls being charged more for things, like razors and haircuts, when maybe it should be the same price. Financial professional Cathy DeWitt Dunn is here. I guess, Cathy, you said that prices are often 7% higher for hundreds of women’s items, just because they’re for us?

Jenny: Yes. Wow, and the only difference often is the packaging.

Cathy: That is correct.

Jenny: Wow. You brought in some of the examples of items that might be different for men and women.

Cathy: Yeah, this is an eyeopener. Well, there’s about…according to New York State Public Affairs office, there’s over 800 items that they recently found, everyday items, where women were actually being charged more than men.

Jenny: Okay, so let’s talk about the examples here. So you’ve got the razors here. What’s the difference?

Cathy: This is pretty interesting. This is the same amount of razors. They’re twin blades, and the pink labeling is all the difference is. So we have…the female razors are $8.89 for a package, and the male’s are $5.69 a package. That’s 56% more for a pink.

Jenny: And you’re thinking it’s kind of the same…it’s the same product?

Cathy: It’s the same thing. It is the same product.

Jenny: That is crazy. I know the same goes for toys, too. Children’s toys, you said, can be more for little girls.

Cathy: Yeah. Just recently there was a scooter for sale, a red scooter, and it was listed for $24.99, and then the pink scooter in the girl’s department was $49.99. So you need to look in department stores in all areas, and also go to both sections. That’s just crazy.

Jenny: Let’s look at these examples, too, in the shaving department.

Cathy: Okay. So now when you see all the women on the men’s aisle, now you’re going to know why.

Cathy: Shaving cream. This is pretty interesting. So we have for the men, it’s $1.40 for this particular container, and for the female, it’s $3. This is 14 cents an ounce for the male, and 43% for the female.

Jenny: Now the companies are probably going to say, “Okay, it has more lotions in it or more moisturizers,” or something like that, but it’s worth it to maybe try the guy’s version and see if it works just the same for you.

Cathy: I actually tried it on this one, there’s no difference.

Cathy: Except I’m saving money now, but this was just an eyeopener for me, that you really take a look at…that’s 32% more, and it’s just amazing. You really can save money if you do this.

Jenny: Right. So hair care’s the other thing, and not a huge shock for men and women, but you brought in another example that…I mean, it’s just a hair dye.

Cathy: Yeah, it’s hair dye. So we had $9 for this Clairol product for females, and we had $7 for the male. So that’s 28% more for the female, and it’s the same ingredients. 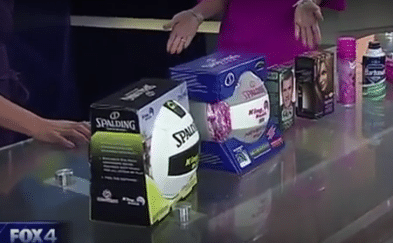 Jenny: This example is…even if you say, “Okay, the ingredients are different on that,” but look at this, just for the balls…these beach balls, volley balls.

Jenny: Real quickly, is there anything that men are paying more on?

Cathy: Yes, thank goodness. On average, males are paying more for car and auto insurance. And so over a lifetime, that might be $15,000 more, because the insurance carriers feel that they have riskier driving behaviors.

Jenny: Oh, interesting, but they have cheaper razors. Cathy DeWitt Dunn, very interesting, at least if nothing else it reminds us to be savvy and just check into the different products.

Cathy: Yeah. Go look at all the generic products in the male aisle. You’ll be very pleased.

Jenny:Good idea. Okay. More information on Cathy and her financial company on our website, Fox4news.com.

DeWitt & Dunn does not provide tax/legal advice. Please consult with the appropriate professional.