KDFW Fox 4’s Jenny Anchondo and Cathy DeWitt Dunn discuss allowance for kids – how to decide how much they should get, if anything, and how often they should get it.

Jenny Anchondo: All right. This morning we’re talking about allowances for your kids, and how to decide what, if anything, they should get. Financial professional Cathy Dewitt Dunn says that an allowance is a great way to teach about money. So Cathy, this survey that we’re talking about is wild to me. It was done by American Express, so keep that in mind, but it revealed that parents are giving an average of $35 a week to their kids.

Cathy Dewitt Dunn: That seems like a lot of money.

Jenny: Wow. It does. So what do you think? Should kids get an allowance, from your financial perspective? 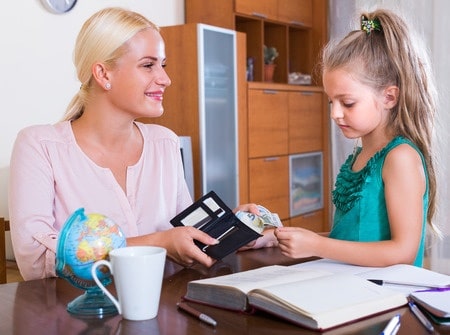 Cathy: Oh, absolutely, but I also take a look at it realistically. I think for every year old they are, that’s maybe how much money they could get for an allowance. So, if they’re three, maybe they could get $3. Because, if you have three or four kids, that’s really going to add up. And you’ve got to make sure whatever plan you put in place, that you’re able to accomplish it and pay it out on a weekly basis.

Jenny: Sure. Definitely that makes sense. It depends on the family. We didn’t get an allowance. It was kind of like “You didn’t do anything for it.” But we did have, if you completed a certain task or a job, then I guess you could get something. Talk about how giving your child an allowance can help teach them about money.

Cathy: So make sure that whatever plan you’ve set up, maybe they have a little chart. Kids do really great with you’ve got five or six little chores and you give them a star and at the end of the week they give you their paper and its all filled out. Its like a paycheck. So it really gets them thinking later down the road about “Wow. I can be very successful. I can make money.”

Jenny: Right. Yes, exactly. So when do you think you should start this? What age?

Cathy: Usually around three, when children can actually start to count money.

Cathy: So all kids right now, especially with iPad apps and everything that are out there right now, once they can really learn to count, that’s when you can really employ a great allowance program for them.

Jenny: And what can we teach our kids before they’re old enough to earn the allowance, about money and savings, the little tidbits?

Cathy: Exactly. Well, take them to the bank, or maybe take them to an ATM machine. That way they see that money really doesn’t…its not just coming out of a machine. Let them make mistakes, and teach them about paying bills and really sit down with them and have that conversation on the weekends. I know I did it with my kids, and its really important.

Jenny: What about savings? It sounds like it’s kind of along the same lines, getting them started with small amounts and teaching them the amounts.

Cathy: Well, one of the great ways to help children with that is with couponing. Maybe let them cut out the coupons or search on the internet to grab coupons, and maybe make that money up for a bonus pool for their allowance on a weekly basis. Because that’s how you can save as a household. I did that many years ago with my children, but be careful if you do that, because the kids really become addicted.

Jenny: They hold you accountable.

Cathy: Right, and you pay out more money than you thought. But it’s a great way for savings. You’re saving as a family, and it’s going to them.

Jenny: Before you know it, you’re at that $35 a week allowance mark. Wow. Okay.

Jenny: Yes, exactly. Any last tidbits people need to know, when it comes to specifically the allowance topic?

Cathy: Just make sure that it is for work, that it is something that you can make sure you can pay out on a weekly basis, and make sure that the children also hold back some money and put it into savings where they’re not spending it. And if they do make some mistakes along the way and spend a little bit too much money here and there, that’s how they’re really going to learn about their financial future.

Cathy: So its okay to let them fail and then get them right back on track.

Jenny: Oh, Cathy, thank you. More info on Cathy and how to get a hold of her on our website, Fox4news.com.